SELF STORAGE IN CARLISLE

Visiting Carlisle? There is lots to see! 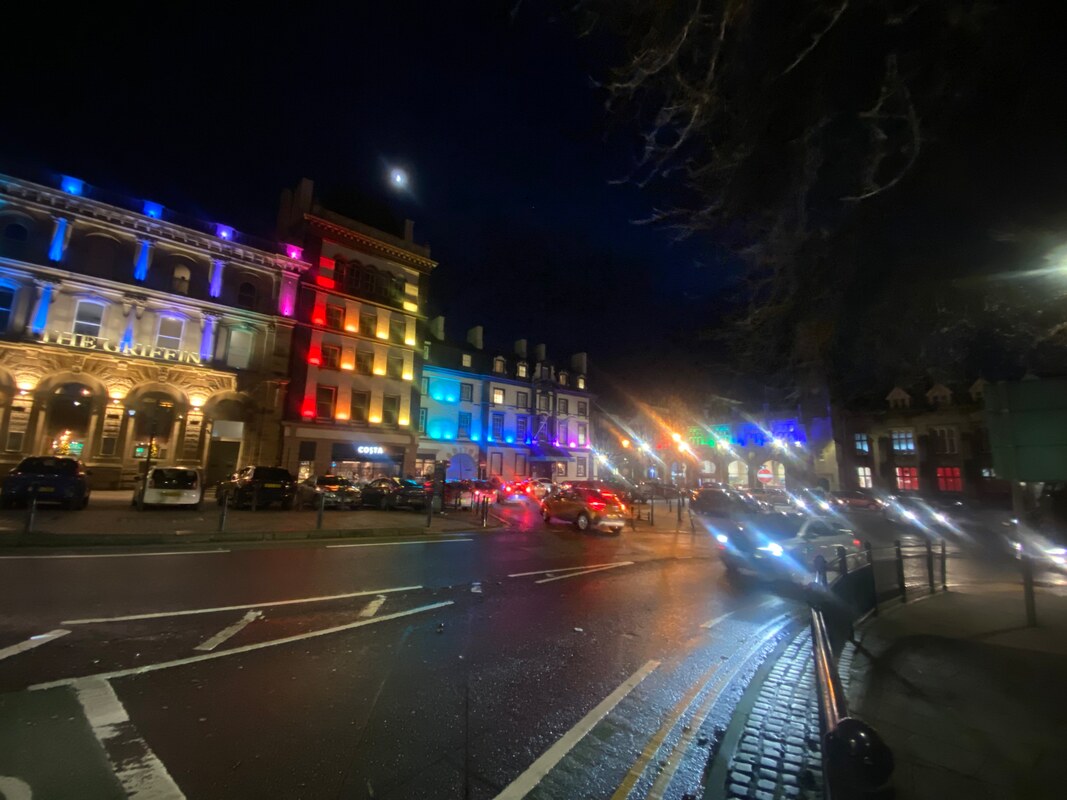 Carlisle City Centre: Railway Station and surrounding buildings, 30th December 2022
We're adding to this page every so often - when we have the time! It's a very brief account of some of the history of Carlisle. Locals may be familiar with this, but if you live outside or are relocating to Carlisle or Cumbria, you may be interested. Bear with us as this is an on-going project.

Carlisle is the regional capital of Cumbria and is full of history. It's population around 100,000 people and covers a much larger area including towns such as Brampton, Longtown and surrounding villages such as Dalston, Wetheral, Scotby. You may live or be relocating to these villages. You may or may not be considering your self storage options! Anyway, a bit of interesting facts and history about Carlisle.

It became an established settlement during the Roman Empire to serve forts on Hadrian's wall. Carlisle was an important military stronghold due to its proximity to Scotland. 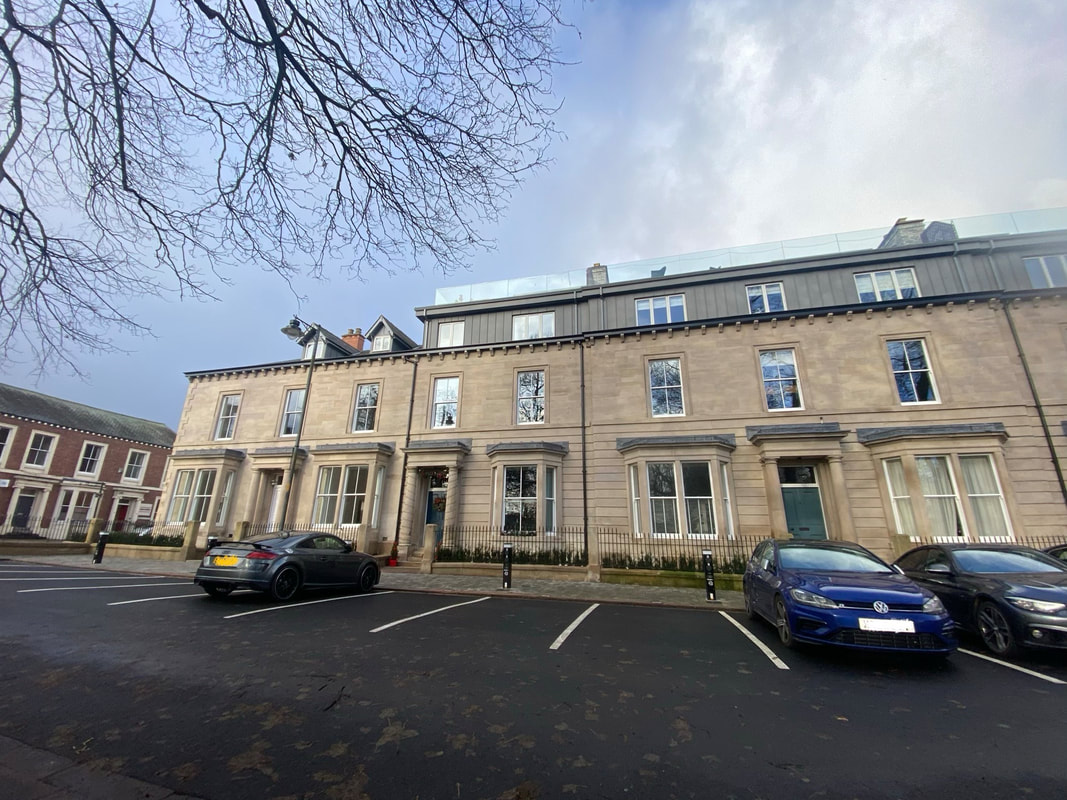 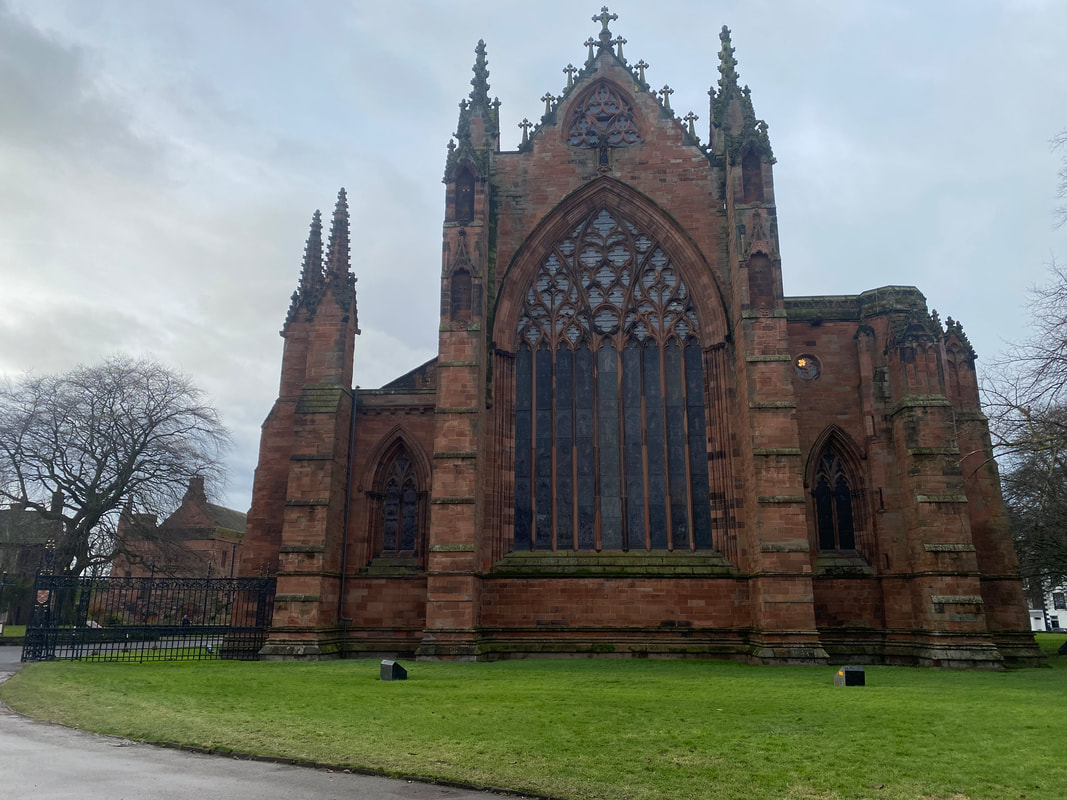 The Cathedral was begun in 1122, founded as an Augustinian priory and became Cathedral status in 1133. It's East window is 51 feet high and 26 feet wide, one of the largest type of window in England.
​
Did you know Carlisle Castle which dates back to 1092, remained a working fortress for centuries? The City of Carlisle withstood sieges and has been home to the Kings Own Royal Border Regiment.

Carlisle has had a turbulent history! Mary Queen of Scots was held captive here, from 1568 by Queen Elizabeth I. Mary was 'imprisoned' at Carlisle, but was allowed to talk walks at the front of the Castle on what we now call 'Lady's Walk'. The cost of supporting her was over £50 a week back then for food and wine!
For five hundred years until the English and Scottish crowns were united in 1603, our Castle was the main fortress of the England/Scottish border. It's interesting to note that the Castle has been continually occupied since William II in 1092, and even from the 1960's houses the Border Regiment. Being a working Castle, it is maintained in excellent order.

Carlisle has some great architecture and interesting buildings around the City Centre. 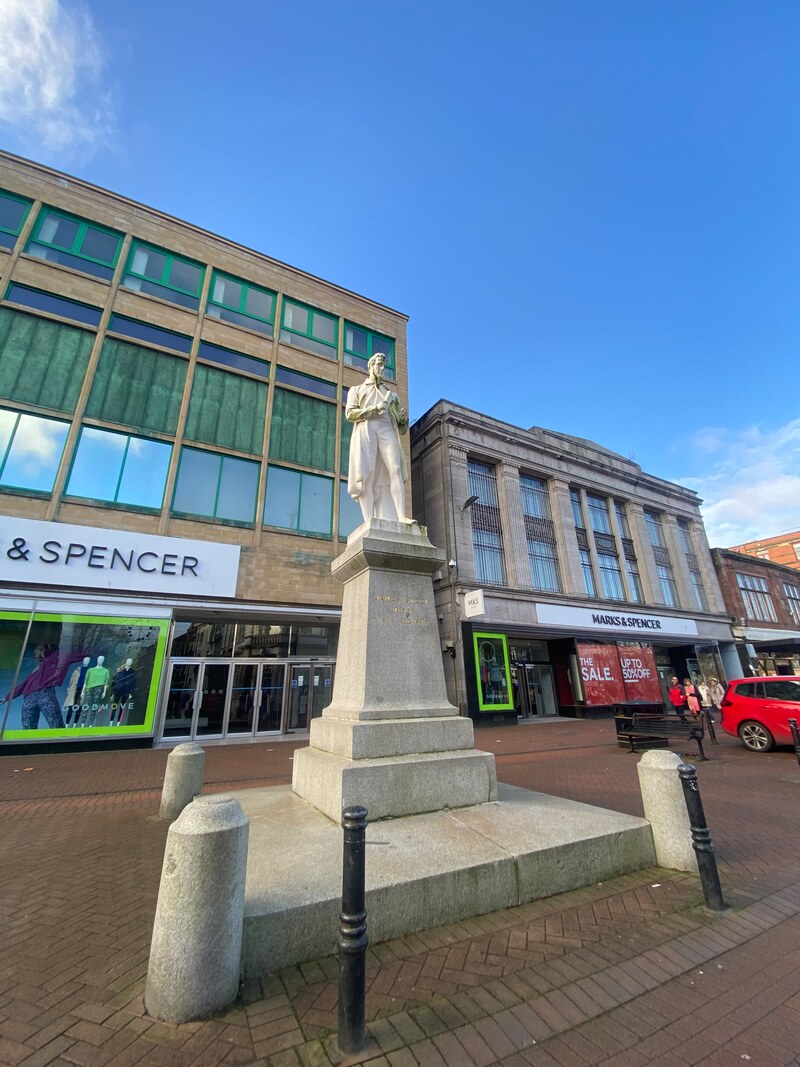 This location of this statue is just a stones throw away from the Old Town Hall, below: 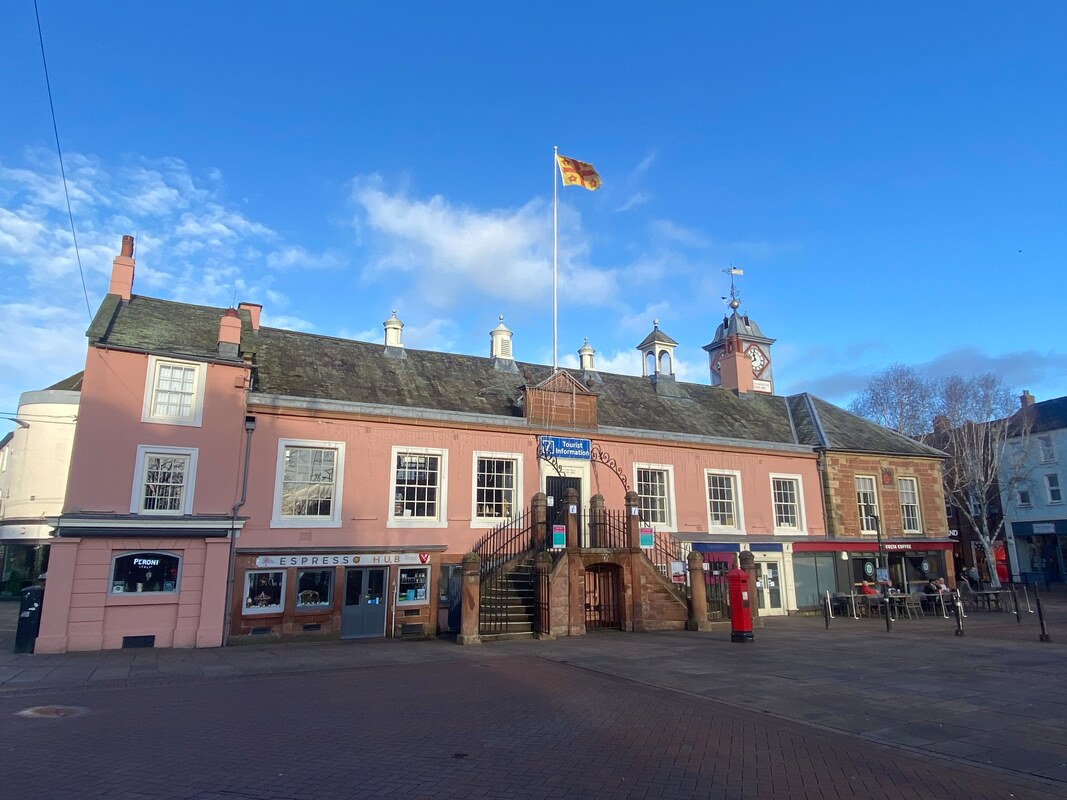 The Old Town Hall, Carlisle
Carlisle's Old Town Hall (note the red pillar box) - this building was constructed to replace an earlier 'moot hall' on the site which dated from 1345. This new building had commercial units on the ground floor and assembly rooms on the first floor and was finally completed in 1669. The assemebly rooms were used until 1881 and magistrates courts used in it until 1941.

​The clock tower, to the right hand side of the building was an addition, placed there in 1717. A further three story extension was constructed in the 1800's (left hand side of building).

In front of the Old Town Hall sits the 'Market Cross', inscribed Joseph Reed Mayor 1682, complete with its sundial and lion holding a scroll. This was erected in 1682 on the site of a former medieval cross with roots dating from 1352 marking rights to the citizens of Carlisle by Edward III to hold an annual fair in the month of August. Carlisle held its first official fair called the Carel Fair a year later in 1353.

The Great Fair as its known now, carries on to this day. 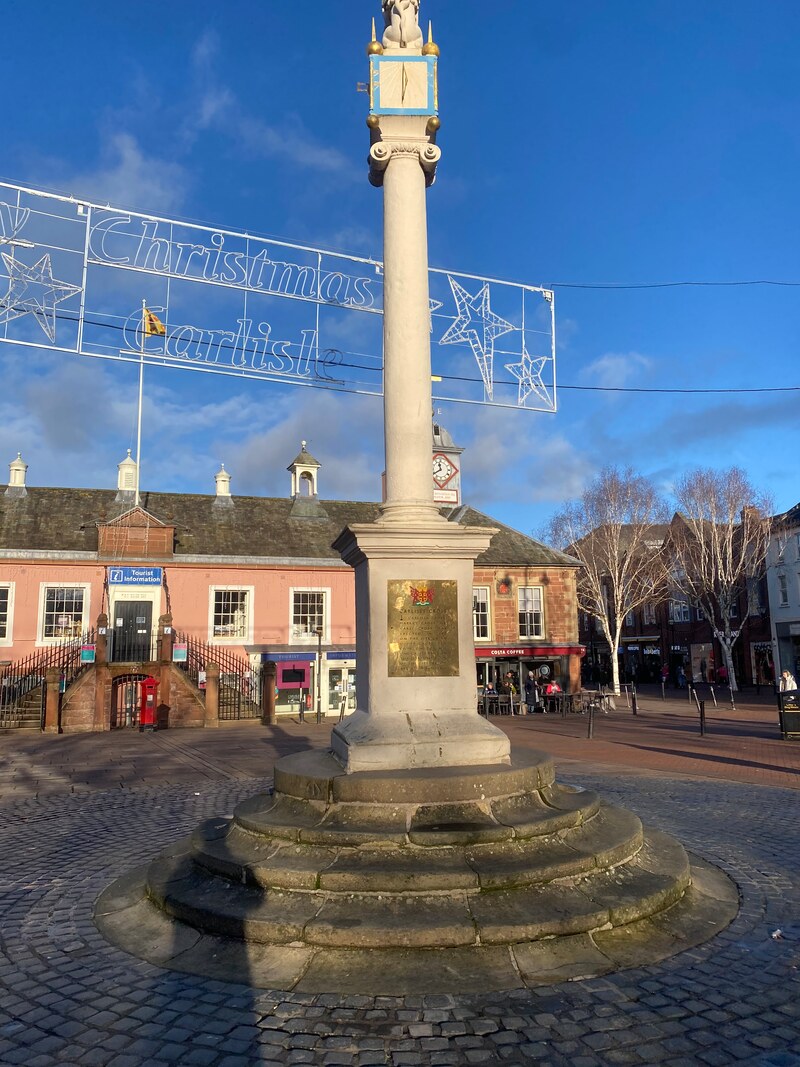 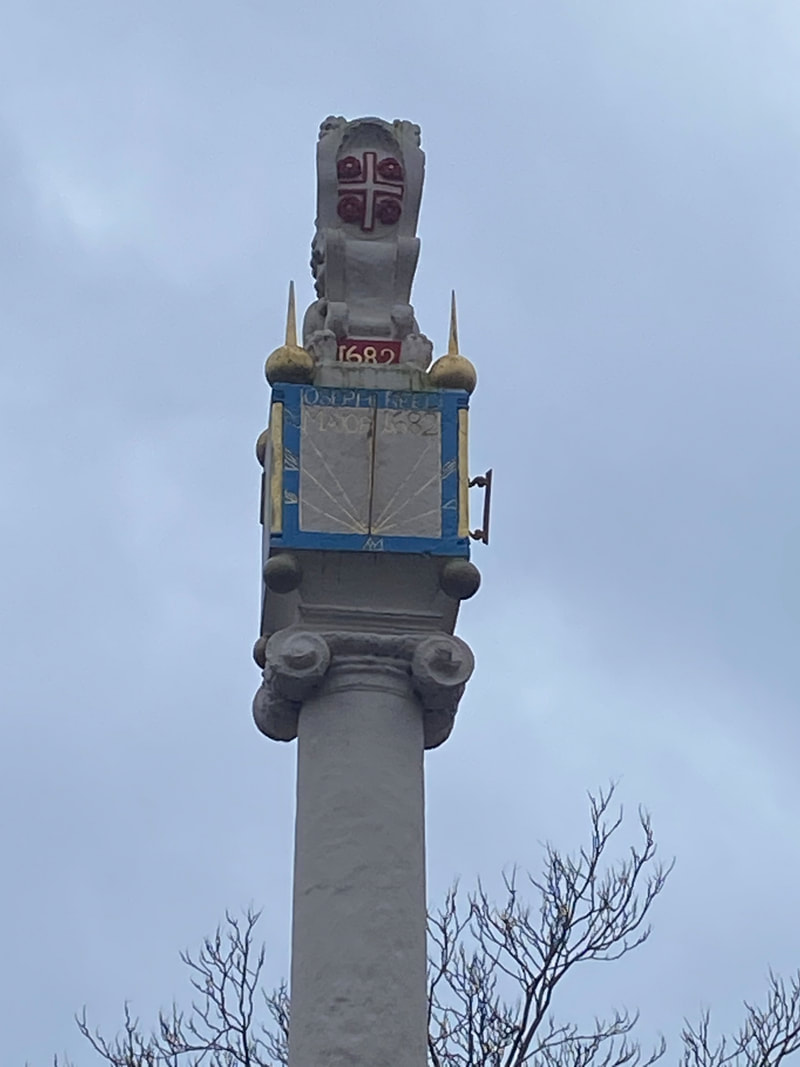 The top of The Market Cross
In the background, infront of The Town Hall and behind the Market Cross, is a red pillar box. What's the significance of this? Well, in 1853, Carlisle was the first City in the entire United Kingdom where the first postal pillar box was installed. It was situated in Botcher Gate (now known as Botchergate) which is a mile or so away from here. Yes, it's true ; Carlisle had the first post box in this year. It didn't survive though. However, its designer, John Wornham Penfold, went on to design the distinctive hexagonal post box, adorned with the Monarchs Royal coat of arms.

A replica of this Penfold post box is situated outside the Old Town Hall today, and it's one of the few remaining ones left.  Infact, only twenty of the earliest designs exist in the whole of the UK today, as they are classed as grade II listed buildings. 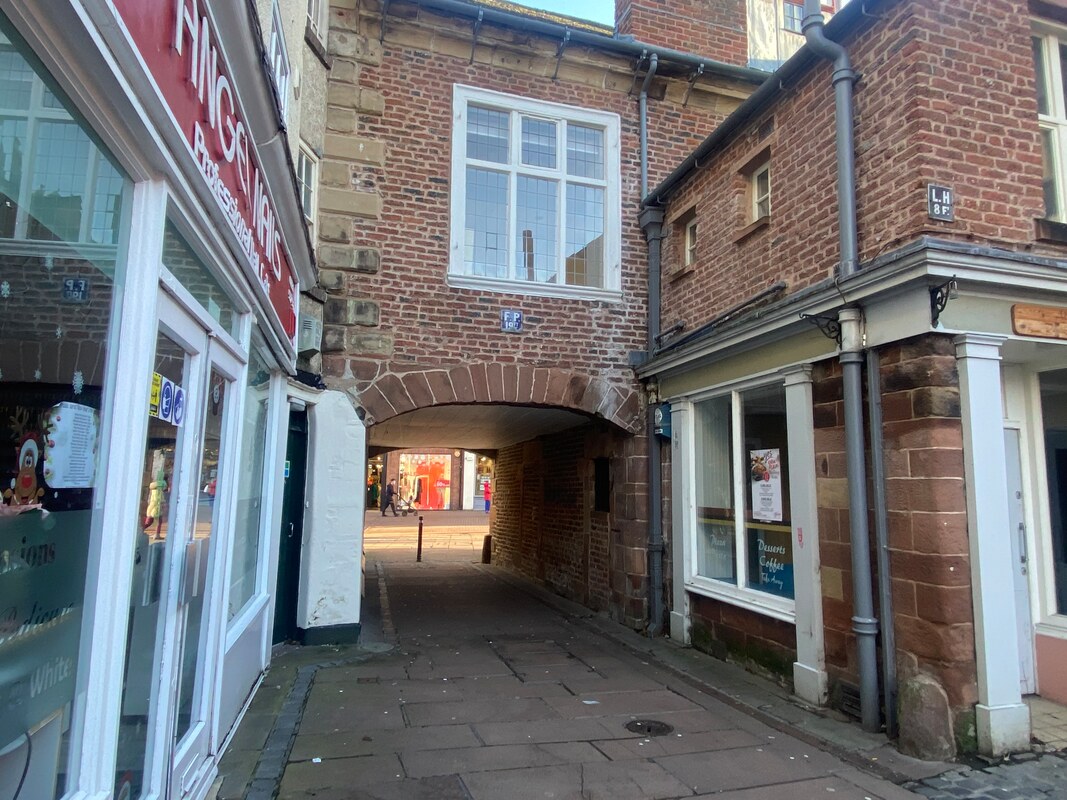 Above: Rear of Old Town Hall, leading to Scotch Street. 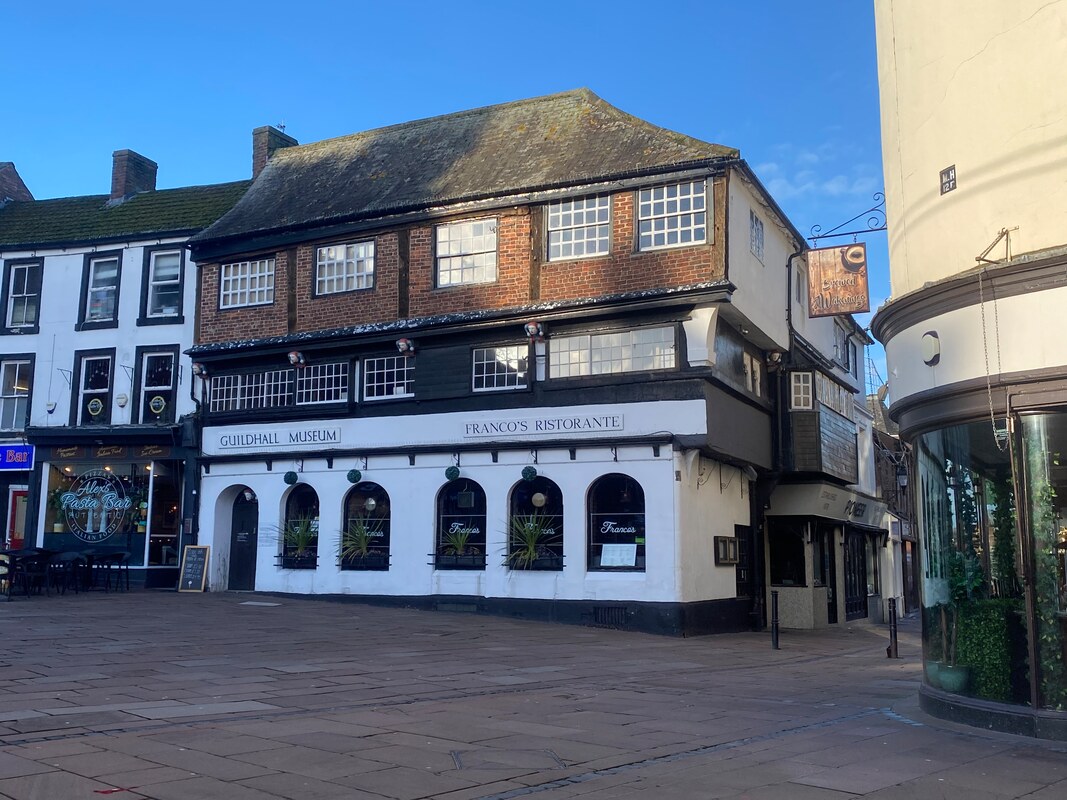 Above: The Guildhall Museum.
The Guildhall Museum is suspected to date from the late 1300's. Can you notice the upper floors project out from the timber framed building? It underwent comprehensive renovation work in the late 1970's. Most of the timber is original - and survives to this day. We know this due to detailed examinations carried out by English Heritage and the local Council.

Internally, the Guildhall Museum has wattle and daub walls. It is believed to have functioned for various types of trading from the 1500's. It operates as a Museum now, and is a popular tourist attraction.

The building is one of the four oldest buildings in the City of Carlisle. 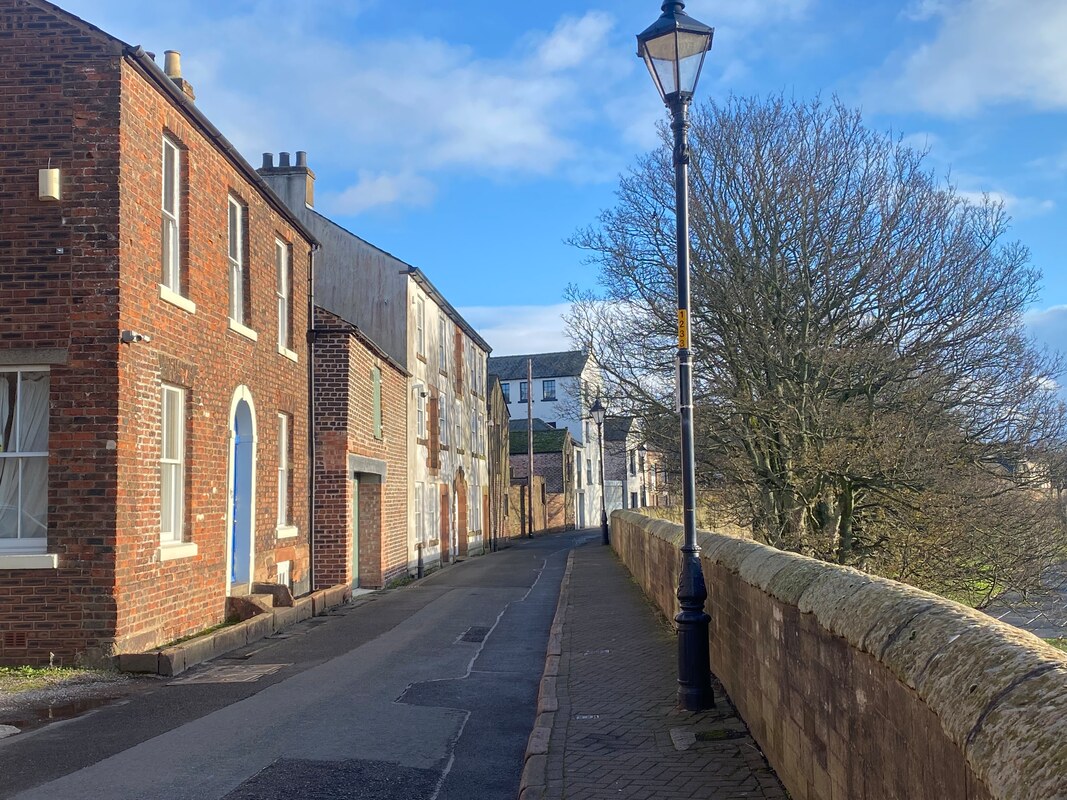 Above and Below, The 'West Walls' 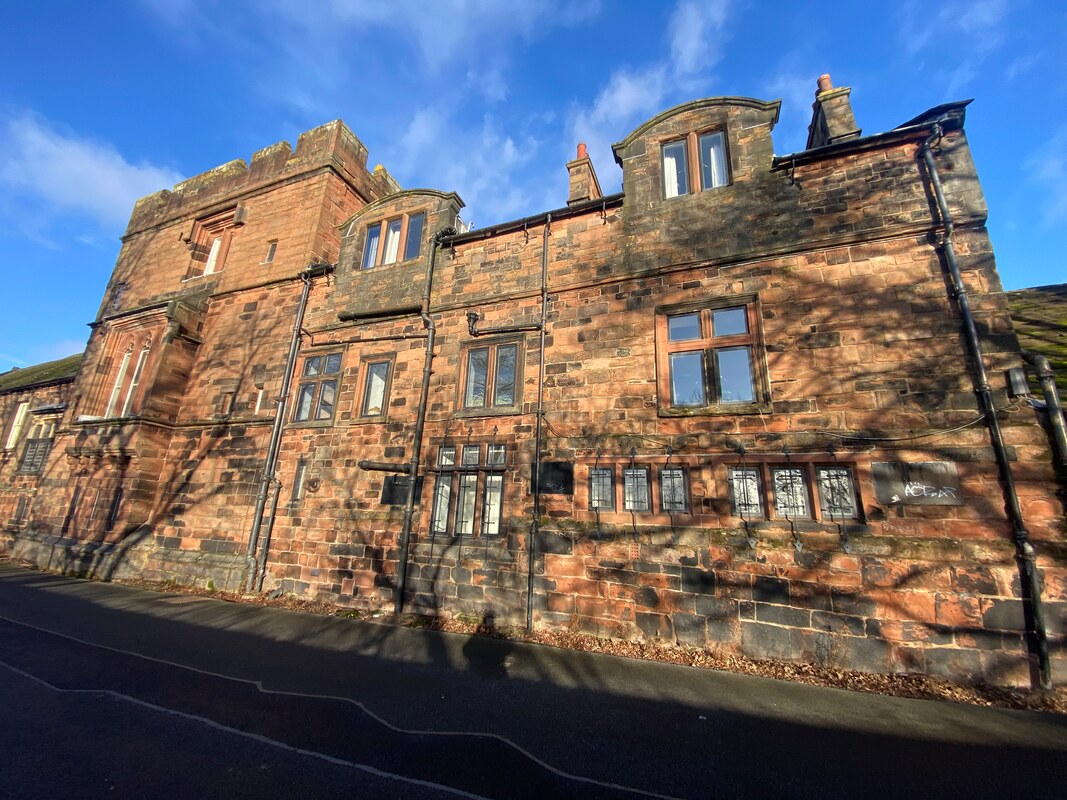 The City Walls in Carlisle were built in the 1100's - They enclosed the City south of The Castle and included three gates the the West, South and East. (one below, the Citadel, looking from Lowther Street) 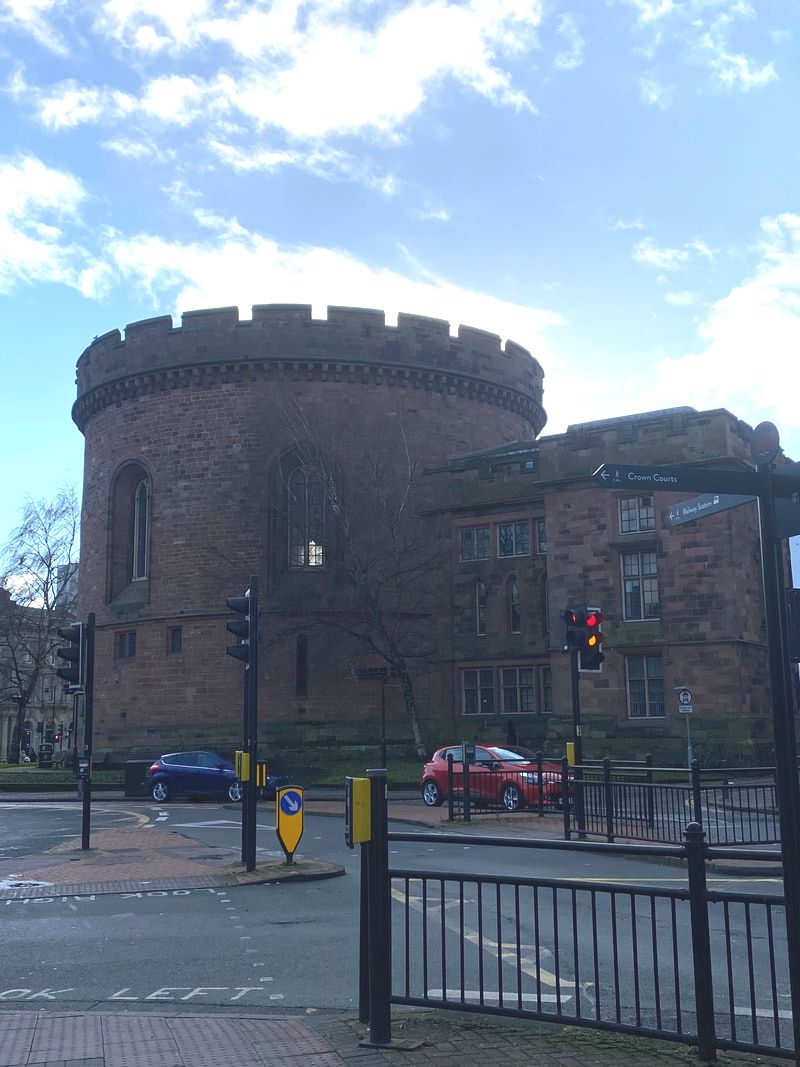 Citadel as seen from Lowther Street 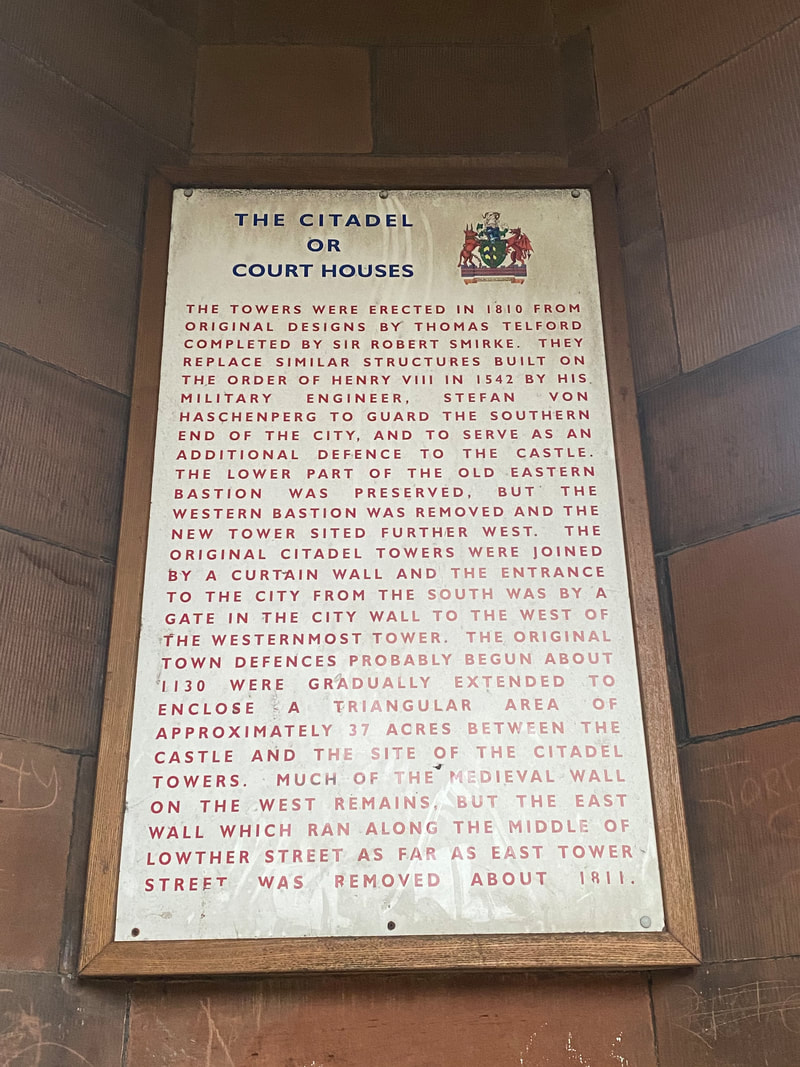 The City walls were a defensive structure and ran from Carlisle Castle in the north-west of the City to The Citadel in the south-east. Between these points, Carlisle was protected by the North and East walls (now gone) and the West Walls. The West walls remain.
​
The gates were called Caldew Gate (Later on, Irish Gate), Botcher Gate (English Gate), and Scotch Gate (Ricker Gate). Unfortunately, most of the gates were demolished in the 1800's but some sections still stand today.
​Other noticeable monuments in Carlisle are our statue of James Robert Creighton within the Hardwicke Circus roundabout. Known as The Creighton Memorial. This represents a tribute to the former Editor of the Carlisle Journal and twice Mayor of Carlisle and council member who was responsible for pushing forward many works in the City such as the Market Hall, Tullie House Library and Museum and road layouts. The statue was erected in 1898. 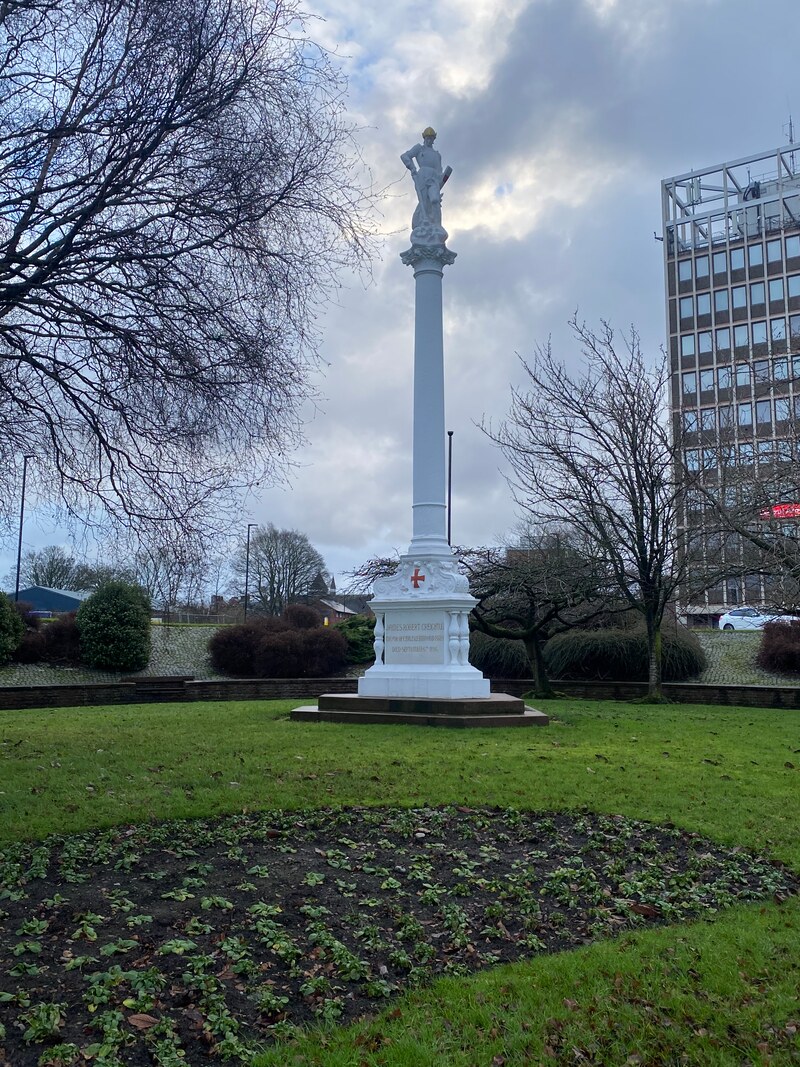 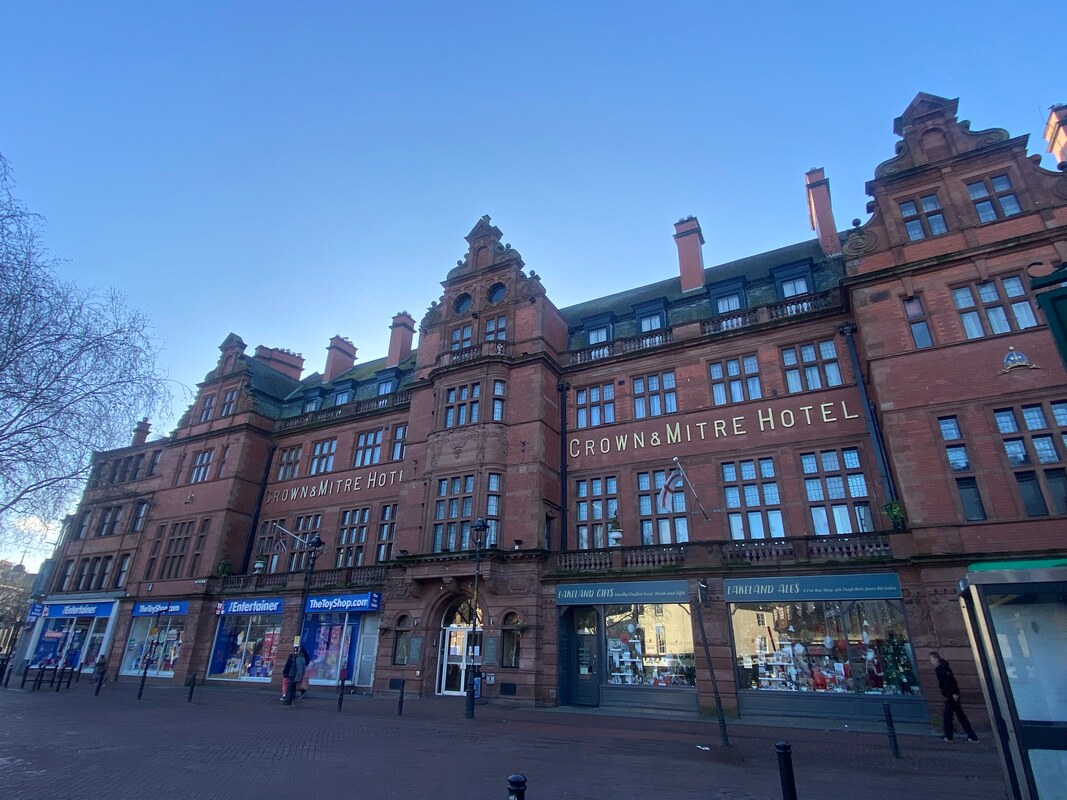 This imposing building is based in the City Centre. Constructed in 1905, known as the Crown and Mitre Hotel and housed on the site of the Crown and Mitre coffee house which had a history dating to before the Jacobite Rebellion who's landlord supported Bonnie Prince Charlie and gave shelter to rebels once they entered Carlisle.

Did you know Woodrow Wilson, the president of the United States, visited this hotel in 1918?

This imposing 1960s building is our Civic Centre, below:
​

Carlisle Civic Centre, Cumbria
Carlisle's Civic Centre, a municipal building in the Rickergate area (Scotch Gate) is the headquarters of Carlisle City Council, constructed by John Laing & Son. It replaced the aging Town Hall premises and was completed in 1964 at a cost of £820,000. It stands 144 feet high. Queen Elizabeth II accompanied by the Duke of Edinburgh, visited it in 1978. It has been listed in a national newspaper as one of Britian's Brutalist buildings most at risk of demolition.
​
​We hope you have enjoyed this very brief account of Carlisle's history and plan to update this page when we have the time! So if you're considering moving here, you now know a few interesting facts. Let us know if you need self storage ... we've got great local knowledge, and are happy to help in any way we can! 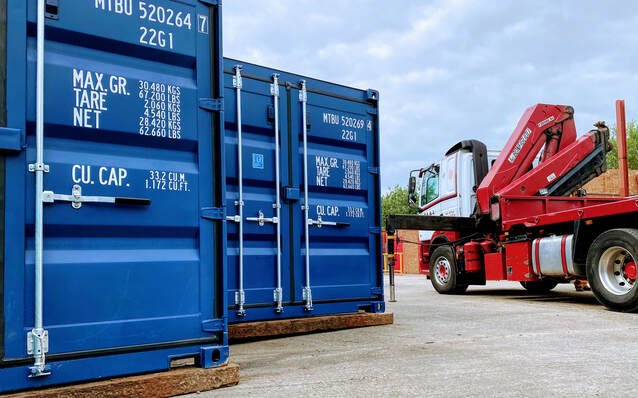 Above: Part of our Self Storage facility at Rome Street Depot, Carlisle. 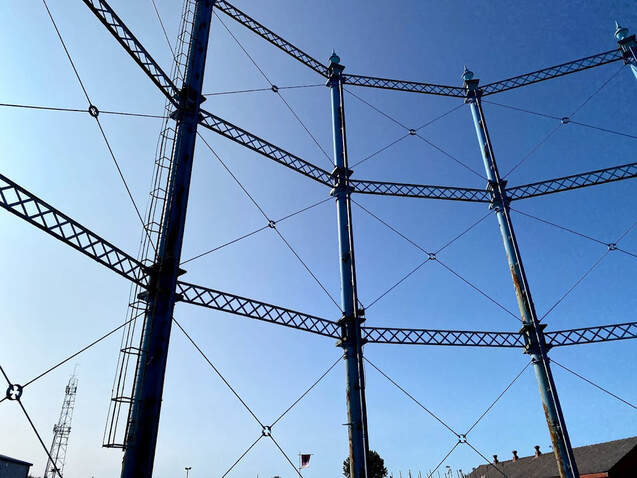 Rome Street Gasholder - adjacent to our facility
Home
All pictures are owned and copyright of Your Lock Your Key® Storage 2023.